The Case Of The “St. Louis ‘CannaBus’ Marijuana Clinic”

It’s the general public and law enforcement are left to try and understand and pick up the pieces .

Missouri is still months away from making its first legal medical marijuana sales, but one St. Louis doctor and traveling cannabis health clinic is being accused of jumping the starting line — and allegedly crossing into drug dealing.

As first reported by the Springfield News-Leader on Saturday, the case revolves around Heath City MD, a Brentwood-based company which this summer began sending a traveling clinic, the “CannaBus,” to small towns across the state. Outside head shops and alternative health clinics, long lines of would-be patients showed up pay $125 for a physician’s certification, which is a key step to obtaining a state-issued medical marijuana card.

It is the “bus” — a black Mercedes-Benz van — which is at the center of allegations that Health City MD is doing more than just registering patients to make legal pot purchases in the future. According to the News-Leader report, the Missouri State Highway Patrol confirmed that it is investigating the complaints, but it’s also worth noting that the newspaper’s report is largely based on the work of a private investigator in Columbia, Melinda Kidder, who documented her own undercover visit to a CannaBus clinic last month.

Kidder, the story explained, had gone undercover at the behest of a client, though that particular client is not named in the News-Leader story. According to a statement from Kidder included in the story, the client had provided “express consent” for her to share her findings with the newspaper.

Here’s where things get even murkier: According to the documents provided to the News-Leader, Kidder wrote that she’d attended the event at a vape store in Fulton, paid $125, filled out some forms and then listened to a speech from one of the clinic’s staff. Afterward, she and the rest of the attendees were directed to go “to the van.”

“I inquired of a Koko Vapors employee as to the purpose of going to the van,” Kidder wrote, “and was informed that was where one could immediately obtain medical-grade marijuana.”

The News-Leader story also quotes from an interview with Kidder, who told reporter Gregory J. Holman that the store employee had made the statement while standing “a few feet away” from Health City MD founder Zinia Thomas. In response, Kidder claimed that Thomas “simply smiled and nodded to me and did not correct his statement.”

In addition to the News-Leader, Kidder reportedly provided documents to the Missouri Highway Patrol. However, while patrol spokesman Sgt. Shawn Griggs confirmed to Riverfront Times that state investigators are “looking into all the information that was provided to us” regarding allegations of “a bus that was traveling around” selling marijuana, he said he could not name the subject or target of the investigation.

In a phone call, an employee at Koko Vapors told RFT they could not comment on the incident and allegations described by Kidder’s report.

As for Thomas, she’s a board-certified psychiatrist with an active medical license in Missouri; her company’s Facebook page lists more than a dozen past and future events and CannaBus tour stops, with October events already scheduled in Springfield, Festus and St. Joseph. According to the company’s article of organization filed the Missouri Secretary of State, Thomas registered the business in late May 2019.

In the past, Thomas has been regularly quoted in media stories about alternative medicine, and more recently she appeared in a Post-Dispatch story exploring the shortage of Missouri doctors who are willing to certify patients for medical marijuana. As a result of that shortage, cannabis clinics like one founded by Thomas have popped up across the state. The businesses often advertise no-hassle registrations with an on-site doctor to sign off that a patient is suffering from the set of ailments covered by the constitutional amendment passed by Missouri voters in 2018.

In an interview with RFT, Thomas described the News-Leader story and the allegations provided by the private investigator as “misinformation.” She also claimed that her company has already been investigated by multiple police departments and the Drug Enforcement Administration “with a fine-tooth comb.” She added that aside from providing patients with legal physician certifications, “no one can find anything on us.”

The allegation, police chief Sean Fagan told the newspaper, “was completely false. They were not selling anything they shouldn’t.”

Editor’s note: The story was updated after publication to include details from an interview with a Missouri Highway Patrol spokesman. 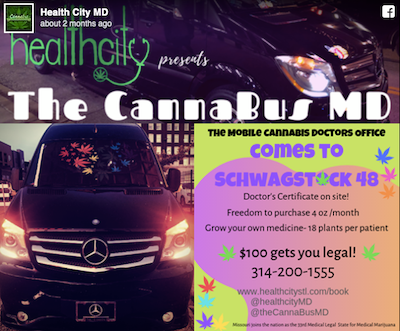