The legality of CBD oil in Asia

Asia is the source of hemp, and has been used for centuries in many Asian cultures. Today the hemp and CBD status varies greatly from country to country.

For instance, China has become a world-leading hemp producer that aimed at supplying the global demand for CBD. On the other hand, Singapore bans all harsh penalties for cannabis products which include a combination of heavy fines and jail time.

To find out whether CBD is available in your country or not, read our article outlining CBD’s legal status in Asia before you buy CBD from any store or online.

Is CBD In Asia Legal?

CBD rules vary widely from country to country, laws are highly dependent on cultural, traditional, and religious differences. In Asia CBD is becoming a cosmetic and beauty trend drug. But, in many Asian countries, it is still restricted. To understand why hemp has been prohibited in Asia we need to consider how the plant is perceived by these countries and should have knowledge about CBD oil and their uses.

Cannabis was cultivated openly in Afghanistan until 1973 when King Zahir Shah declared the plant illegal and imposed severe punishment on usage of it including lengthy jail time and death penalty. It has been an important cultural role in Afghanistan, and it is used by locals even today. Its use and production is prohibited, however.

CBD is not lawful in Afghanistan and any associated conduct may result in a severe penalty.

Cannabis is completely banned in Bangladesh, and so are its derivatives. Penalties on possession and use of cannabis are serious and include death penalty.

CBD oil is banned in Bangladesh and is illegal for possession, selling and use.

The Chinese authorities permitted hemp cultivation in two Chinese provinces that is Yunnan and Heilongjiang , in 2010, having been prohibited for 25 years. In 2018, Jilin became the third approving province to grow hemp.

CBD is not on China’s narcotics list, and officials say it’s legal as long as it meets the 0.3 percent THC. CBD is currently permitted in cosmetics in China but not as a food additive or health food.

Food and food additives imported into China must have Chinese labeling and requirements under the Food Safety Act, i.e. they must be approved for import.

The Indian Federal government requires its own hemp cultivation laws to be set for its states. India is currently working on new laws regulating hemp as a crop (< 0.3 percent THC). The state of Uttarakhand approved hemp growing by the Indian Industrial Hemp Association (IIHA) in July 2018. Uttar Pradesh is the second state legalizing work and production of hemp.

Cannabis is completely illegal in Iraq, and its metabolites that contains CBD is banned.

Status: Legal for Medical Use

Israel is the world leader in research and development on CBD oil but strictly controls the cannabinoid. Until recently, the Ministry of Health resisted the full legalization of CBD, the cannabinoid was only accessible to patients applying directly to the ministry for a medical license.

Throughout Japan, hemp derived CBD is legal because it does not contain any trace of THC. The Ministry of Health approved CBD oil in early 2019 for medical trials for patients with epilepsy.

You will look for companies that offer pure CBD (CBD Isolates) when purchasing CBD in Japan. However, a few companies are also allowed to export CBD to Japan.

Cannabis and its derivatives in Kuwait are strictly prohibited, and possession of any quantity and type of cannabis product may result in severe sanctions.

Status: Legal for Medicinal Use

The Malaysian government allows the production of hemp for research purposes but restricts its use to fiber and seed only. It is illegal to cultivate and process the hemp for medicinal or commercial purposes. However, distributors and companies authorized by the government are allowed to sell CBD after their goods pass through a series of rigorous trials and meet the legal requirements.

Nepal has not specified its hemp laws, theoretically it is illegal under the law, but some territories require cultivation under a license issued by the Government.

Since hemp lives somewhere in the legal grey area, CBD is not distinct from cannabis and is not approved for use. CBD production are still heavily penalized but the government is considering the removal of the death penalty.

North Korea has a well-developed hemp industry but CBD is not expected to be permitted. CBD oil’s uncertain status is attributed to North Korea’s lack of openness against the outside world. 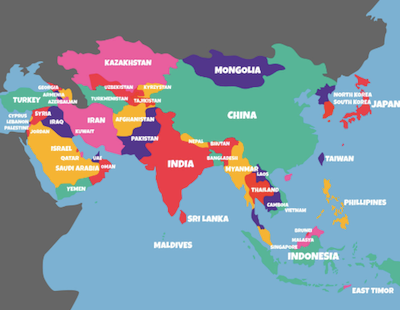