The Guardian writes…….In a report published on Monday, the Adam Smith Institute, a free market thinktank, and the Conservative drug policy reform group, urge ministers to order a review of psilocybin and remove the obstacles faced by researchers.

Under Home Office regulations, psilocybin is classified as a schedule 1 drug, along with raw opium, LSD, ecstasy and cannabis, and is not considered a medicinal compound. While clinical trials are allowed under licence, obtaining one takes more time and money than many researchers can afford, the authors say.

The report calls on government to make psilocybin a schedule 2 drug, a move that would dramatically cut the cost and time taken to obtain a licence and remove the stigma surrounding research into the drug.

Jo Neill, a co-author on the report and professor of psychopharmacology at Manchester University, said: “Patients are losing out because it’s taking an awful lot longer and it’s costing a lot more money to get the research evidence we need to have psilocybin approved for use. And there are patients dying in the meantime, there are people killing themselves. 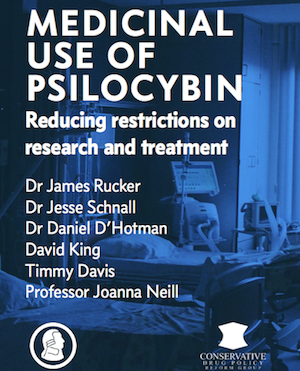