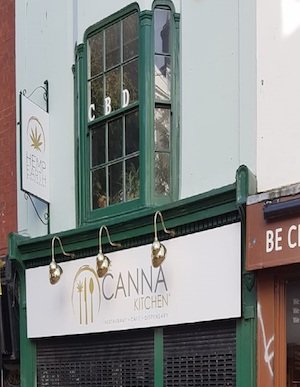 An investigation into whether the UK’s first cannabis restaurant broke the law by selling food with cannabis extracts has been passed to prosecutors to decide whether to bring charges.

Meanwhile, the owners are attempting to sell the Duke Street unit, with another restaurant lined up to take it on subject to planning permission.

Canna Kitchen was one of three premises raided by Brighton police in May, along with the Hemp Life head shop in London Road and a home address in North Place.

At the Duke Street restaurant, police seized what they described as a “significant quantity of herbal cannabis” – but which the owners insisted was legal industrial hemp.

The restaurant closed its doors while it took legal advice, but a planning application lodged this month says it is selling up.

Following the raids, A 32-year-old man attended a voluntary interview under caution on suspicion of being concerned in the supply of class B drugs on August 15.

Brighton and Hove News understands he is Sammy Ben-Rabah the director of SSB Evolution Ltd, the company which ran Canna Kitchen.

Police said the restaurant owners fully co-operated with the investigation.

A 36-year-old woman was also arrested in May during the North Place raid on suspicion of supplying Class B drugs – reportedly CBD flowers and oil – and released the following day under police investigation.

This week, police said she remains under investigation while the Crown Prosecution Service considers the file.

The main issue the CPS will consider is likely to be whether products containing CBD – an extract of cannabis – are legal or not.

The law is clear that the sale of the hallucinogenic component of cannabis, THC, is illegal.

What is unclear is whether cannabis extracts with trace levels, if any, of THC are permissible.

A Home Office guidance note released before the raids states that it is very difficult to isolate pure CBD and that many products don’t accurately disclose their contents.

The planning application is to change the use of the unit from retail to restaurant – a previous application made when Canna Kitchen first opened in December last year was refused on a technicality.

Officers also said that the restaurant had not demonstrated that the change of use would not lead to more noise and smells.

The application, lodged by SSB Evolution Ltd which ran Canna Kitchen, says: “A potential buyer has been found and would be seeking to use the building as a café/restaurant.

It adds: “There have been no significant complaints from previous use as a café/restaurant.

“The existing kitchen extraction will be retained and operates at low volumes at second-floor level that causes no notable harm to the surrounding area.”