Dispenseroo seems to go from strength to strength

An illegal cannabis delivery start-up in the UK is generating millions of pounds in revenue less than a year after it was created, according to its founder.

Dispenseroo, which unlike other online drug markets operates on the open web, has attracted thousands of customers in recent months through guerilla advertising campaigns and word-of-mouth.

The unorthodox approach of shunning the dark web means the site is easily found through popular search engines like Google and DuckDuckGo, allowing it to grow tenfold in recent months.

The founder, who goes by the name “S”, told The Independent that he had never sold drugs before starting Dispenseroo, and only created the service out of frustration with “archaic” cannabis laws in the UK.

“There is a huge difference between hard drugs and weed,” he said. “There is a lot of misinformation and negative images to those that are ill-informed. But many of our customers use cannabis for medical reasons and to treat complex illnesses like depression.”

A spokesperson for the National Crime Agency said it was a policing matter while the Met Police was unable to confirm whether there is an ongoing investigation into the start-up. The Independent has approached the Home Office for comment.

S refused to say exactly how much the site is currently making due to security concerns, but said it was shipping thousands of orders each week, suggesting that monthly revenue has surpassed £1m.

Deliveries come in vacuum-sealed bags to hide the smell and are delivered through traditional postal services like Royal Mail. Dispenseroo customers that The Independent spoke to described the service as convenient, though slightly overpriced compared to street dealers.

Not only does it operate on the open web, it offers many of the same services as legitimate businesses. There are next-day delivery options, live-chat customer support – with the same Monday to Friday operating hours as other retailers – as well as regular giveaways and promotions.

Dispenseroo is intent on being “as revolutionary as the food delivery service” that helped inspire it. But Deliveroo has launched legal action against the start-up, in a battle S describes as a “David vs Goliath” contest.

A Deliveroo spokesperson told The Independent that a complaint has been lodged with Dispenseroo’s website registrar and the World Intellectual Property Organisation, citing the “obvious and substantive mimicking” of its brand.

S said that Dispenseroo sees “our fight with Deliveroo is just another hurdle we must overcome”. But the company also announced on its website that it would be rebranding to “Dispenseree” in future.

Dispenseroo is also being investigated by Transport for London after an unauthorised stunt saw ads for the site posted on the London Underground.

TfL said in a statement that it took the issue of flyposting “extremely seriously” and all adverts have since been removed.

Dispenseroo is planning to take its advertising “to the next level” in 2023, according to S, while also advocating for more favourable cannabis laws. 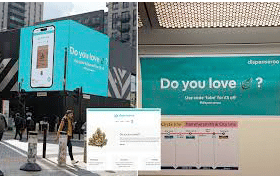