As they say, truth is stranger than fiction.

We must remember that the British have previous form with this sort of behaviour, as the Chinese found out to their cost in the 19th century with opium.

RT.com reports…A drug reform group has slammed the government for claiming cannabis has no medical use while allowing its export abroad. It comes after the UN revealed the UK is the world’s largest producer and exporter of medical cannabis. 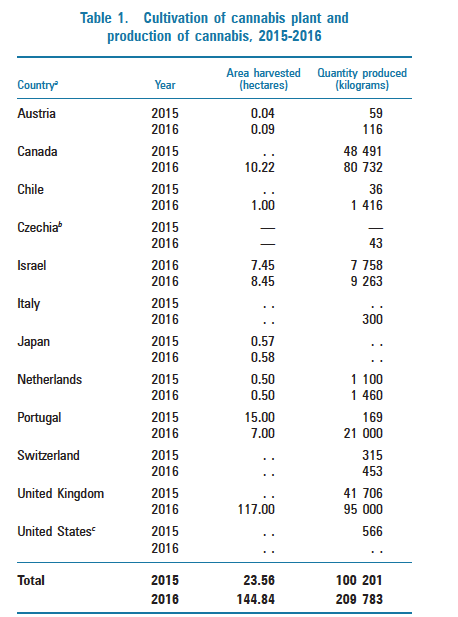 The report from the UN’s International Narcotics Control Board, which includes data from governments around the world, shows the UK produced 95 tons of legal cannabis in 2016. This accounted for 44.9 percent of the world total.

The nearest competitor is Canada, with 80.7 tons. Some 2.1 tons was exported from the UK, making it responsible for 67.7 percent of the world total, followed by the Netherlands (16.4 percent).

The UK government has refused to allow medical cannabis in the UK on the basis that it has “no therapeutic value.” There is, however, one licensed cannabis-based medicine in the UK called Sativex – a cannabis extract in spray form – produced by GW pharmaceuticals, which accounts for a significant proportion of UK legal cannabis production. It is available on prescription for patients such as those suffering the effects of multiple sclerosis, but only via the National Health Service (NHS) in Wales.

Steve Rolles, lobby group Transform’s senior policy analyst, says it is “scandalous and untenable” for the “government to maintain that cannabis has no medical uses, at the same time as licensing the world’s biggest government approved medical cannabis production and export market.” He added that UK patients are either denied access and suffering unnecessarily or are forced to buy cannabis from the criminal market.

Estimates suggest as many as 1 million people who use cannabis for medical purposes are put at risk from buying cannabis on the criminal market. Rolles says it is “profoundly unethical” and “a violation of the fundamental right to health” to deny people access to medicine.

“The government must relax restrictions that grant a monopoly for a single product to a single company. It must allow access to cannabis-based medicines that serve patients need – what they don’t need is the government’s cruel and misguided war on people who use drugs,” he said.

Page 24 is the relevant page