The “bliss molecule,” the “human THC” – anandamide has acquired a few glorious nicknames since being discovered in the early 1990s, but what effects does this endocannabinoid and neurotransmitter really have? And how can we activate and benefit from them?

In this article, we’ll explore what role anandamide has in the endocannabinoid system (ECS), the similarities and differences it has with delta-9-tetrahydrocannabinol (THC), the main psychoactive chemical found in cannabis, and how cannabidiol (CBD) products can be used to stimulate anandamide to provide relief from various ailments. We’ll also look at how physical exercise helps to boost this chemical.

What does anandamide do?

Anandamide is a neurotransmitter, similar to endorphins, dopamine and serotonin. Anandamide is a potent antidepressant, hence why it is noted for inducing “blissful” sensations and as a natural, reliable mood-enhancer – anandamide is found in the cacao plant and therefore chocolate, which partially explains why we often feel better after eating some.

The presence of anandamide also helps to reduce sensitivity to pain and can also stimulate appetite. The endocannabinoid also appears to affect immune system response, as cannabinoid receptors, and specifically CB2 receptors are found on white blood cells. Existing research suggests that anandamide and 2-Arachidonoylglycerol (2-AG), another endocannabinoid and neurotransmitter, influence the immune system to stop hyperactivity and excessive inflammation.

The similarities and differences between anandamide and THC

Anandamide was revealed as the endogenous analogue of THC by Raphael Mechoulam, the same Israeli researcher who isolated the psychoactive substance, and also CBD, in the 1960s. Anandamide is to THC and the endocannabinoid system what opioid alkaloids such as morphine are to the opioid system.

Anandamide and THC are both agonists of the CB1 receptor. However, THC is much more potent than anandamide, and therefore takes longer to be degraded. THC’s effect on appetite can be much more pronounced, with intense cravings and the possible side effect of cotton mouth. The mood boost that comes from THC is also more akin to euphoria, but the strong psychoactive effects of the cannabinoid can also magnify mood declines and arouse feelings of anxiety and paranoia in unfamiliar or unsettling situations.

In a medicinal context, THC works to amplify the therapeutic effects of anandamide. For instance, anandamide is an endogenous painkiller – many people use medical cannabis to relieve chronic pain. THC may also make up for natural deficiencies in endocannabinoids, which may be the underlying, and previously-hidden reason for certain illnesses. There is a small, but growing body of evidence suggesting that fibromyalgia, migraines and irritable bowel syndrome (IBS) may be linked to the same disorder, a medical concept known as Clinical Endocannabinoid Deficiency (CECD).

How to boost anandamide with CBD

The good news is that those who are unable to increase anandamide levels on their own can do so with the help of CBD. The cannabinoid inhibits the FAAH enzyme, meaning anandamide stays active in the ECS for longer, thereby increasing its potency. CBD works similarly to boost concentrations of 2-AG.

A patient with depression may be suffering with a low mood due to a lack of anandamide. By taking CBD, perhaps in the form of CBD vape oil and e-liquid which will have the fastest effect, anandamide can treat this chemical imbalance. Furthermore, relief from obsessive-compulsive disorder (OCD) symptoms has been associated with increased levels of anandamide – while more research is required in this area, it’s possible that CBD may be an effective treatment for this disorder.

Those struggling with a poor appetite could benefit from consuming CBD products, which stimulate hunger by boosting anandamide. Appetite is regulated via the CB1 receptor, which anandamide binds to. This benefit could be a helpful add-on for people with depression, as loss of appetite is a common symptom.

CBD is renowned for having powerful anti-inflammatory effects, but these are realized through the compound’s promotion of vital endocannabinoids, anandamide and 2-AG. Both are agonists of the CB2 receptor, which controls inflammation by influencing white blood cells. The body is afflicted with all kinds of inflammation, which can be managed with different CBD products. Inflammatory bowel diseases (IBD) such as Crohn’s occur inside of the body, and therefore a treatment involving either ingestion or inhalation is necessary.

However, for inflammation that is affecting the skin, such as acne, which is caused by irritation and overactivity in the sebaceous glands, a topical product will provide more substantial relief. By the same logic, localized pain near the surface is also more effectively remedied with a CBD pain cream or similar. There is still some uncertainty as to how CBD reduces sensitivity to pain, but anandamide’s status as an agonist of the TRPV-1 receptor could be key. Also known as the vanilloid receptor 1, this protein controls both heat and pain sensation.

Sometimes, scientists get it wrong – and this seems to be what has happened with the understanding of the chemical effects behind the “runner’s high.” This antidepressant, and somewhat euphoric effect is very familiar to those who workout often, and it kicks in after a period of strenuous exercise.

The old belief was that this “high” was initiated by the flooding of endorphins, naturally-produced opiates, to the brain. But recent European research suggests that anandamide must make up the bulk of this effect, as endorphins cannot penetrate the blood-brain barrier and bind with receptors that could trigger a change in mood. However, anandamide can and does, binding with the CB1 receptors expressed in the central nervous system. Therefore, the renowned antidepressant effects which come from exercising, and especially running, are being instigated via the endocannabinoid system and cannabinoids found in cannabis!

It is amazing how much anandamide can do for physical and mental health considering that it’s such a recent medical discovery. Moreover, it indicates how important cannabis and its most prominent cannabinoids are as therapeutic agents for a multitude of conditions. For fibromyalgia patients, anandamide appears to be essential for alleviating symptoms. And for migraineurs, while there are treatments that are as effective as cannabis, they tend to cause side effects. 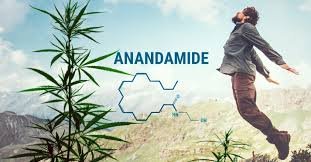