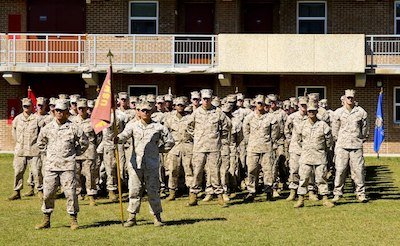 LSD certainly throws up some interesting stories and thoughts and instead of smoking weed or doing a line of coke the drug of choice appears to be LSD for 2d Marine Division. Over 4,000 tests for LSD use have apparently been conducted this year alone.

Sgt. Maj. Daniel Krause, 2d Marine Division sergeant major sees no place for drug use within the 2d MARDIV and in this case we might agree ! US Marines on a fully blown trip in a warzone should, we imagine, be injurious to colleagues and non combatants alike.

Marines and Sailors inherently know the risks associated with taking drugs – non-judicial punishment, court martial, and even separation under other-than-honorable conditions, but, recently, the 2d Marine Division (2d MARDIV) has made a significant changes toward effectively identifying those who fail to heed the ‘Corps’ longstanding zero-tolerance policy.

From day one, every recruit’s first footsteps at boot camp lead him or her to a sign displaying: “Marine Corps Policy on Drugs: Drugs will not be tolerated.”

Despite this clarion call for abstinence, some Marines and Sailors make the choice to use, and in particular to use the recreation drug lysergic acid diethylamide, or LSD.

Previously, the Department of Defense drug lab only accepted individual samples for testing of LSD, pursuant to law enforcement requests. This meant you would have to have already had some form of probable cause for search, and not just a random screening as the basis for the test; however, all that changed following recent incidents involving either Marines or Sailors violating policy and using LSD.

“We are committed to identifying violators of our ethos,” Donovan said. “The vast majority of Marines within the 2d Marine Division routinely uphold our core values, and they deserve to know that the Marines to their left and right are doing the same.”

In order to continue to uphold its high standard as a premier fighting force, 2d MARDIV has begun conducting random LSD testing – nearly 4,000 LSD tests since the start of this past summer.

“Zero tolerance is the Marine Corps’ stance, and Marines need to understand that there is no drug that they can take without the means for government detection,” said Lt. Col. Christian Ruwe, the staff judge advocate for 2d MARDIV.

If a Marine tests positive – and several have, he or she faces the risk of a non-judicial punishment, a dishonorable discharge, or even time at a military corrections facility.

“At the end of the day, it’s about trust,” said Master Chief Petty Officer Christopher Rebana, command master chief of 2d Marine Division. “I have to trust that those on my port and starboard are bringing their ‘A’ game, physically and mentally, and both in garrison and in combat.”

LSD screening hasn’t traditionally been standard practice across the Department of Defense. The push to make common testing the norm within 2d MARDIV not only makes the division a leader in striving to maintain its preeminent battle readiness, but also allows the division to set an example for others wishing to eradicate drugs within their ranks to follow. Leaders say it’s all about ethos and non-negotiable standards.

“If we don’t uphold the standard, we just set a new one,” Rebana said.

Second MARDIV leadership encourages service members with knowledge of this type of illegal activity occurring to report it to their respective chains of command, according to Sgt. Maj. Daniel Krause, 2d Marine Division sergeant major. He, too, sees no place for drug use within the 2d MARDIV.