A man accused of concocting a scheme to hide his role in a major drug conspiracy was sentenced Thursday to almost 30 years in federal prison. The sentencing of Samuel Pena-Columna took place before Chief District Court Judge Robert Molloy at the Ron de Lugo Federal Building on St. Thomas.

Columna was arrested and charged with being part of a drug smuggling operation that took place on St. John’s east end in late September 2019. The transfer of 100 kilograms of cocaine was interrupted when federal interdiction agents confronted the smugglers. Gunfire erupted, wounding one agent and one of the gunmen.

The defendant was found guilty by a jury at the end of a trial in September. As he pronounced Columna’s sentence Thursday, the judge explained the grave nature of his crimes.

“The exchange of gunfire resulted in a federal officer being shot and one of your co-defendants having a leg amputated as a result of being shot and wounded … The crimes are very serious and could have resulted in the loss of life of government employees,” Molloy said. 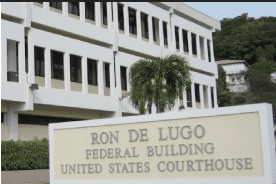