JACKSON, Miss. (AP) — President Donald Trump’s campaign is telling a Mississippi group to stop saying that Trump supports a ballot measure that would legalize medical marijuana in the state.

Mississippians for Compassionate Care is a group promoting Initiative 65. It paid for a letter signed by several prominent Republicans, and the outside of the envelope said: “Join President Trump and 3 out of 4 Mississippi Republicans who support medical marijuana.”

The letter said: “President Trump Supports Medical Marijuana … and allowing states to decide on that issue.”

Arizona voters have another opportunity to legalize cannabis next month, after narrowly defeating adult use legislation four years ago. In recent years, the Copper State’s medical cannabis market has seen significant MSO expansion, and new mandatory testing requirements launch at the beginning of November.

There are roughly 150 medical cannabis licenses in the state currently — all of which would receive priority status in the application process for adult use licensing. Additionally, diversity applicants and applicants in areas currently lacking cannabis retail access would be fast-tracked applicants.

Prop. 207 does include local control and opt-out provisions, and a new 16% tax would direct revenue to a variety of funds, while retail operators would be able to launch delivery services as soon as 2023.

Mississippi could become the 34th state to legalize cannabis for medical use, but two competing measures are creating complications on the ballot. A citizen-driven campaign led to the placement of Initiative 65, while the legislature responded with Alternative Initiative 65A.

Previous bills have been proposed, but never brought to a vote — leaving some skeptical that anything at all may come of Initiative 65A.

Montana’s existing medical cannabis program relies on a system of caregivers who cultivate cannabis and make manufactured products, including edibles and concentrates. Additionally, there is a limited number of licensed dispensaries throughout the state. Legalization would be a major evolution for Montana, which has seen multiple ballot initiatives and legislative interventions in recent years.

Two measures have been placed: one constitutional amendment to set the age of 21 as the minimum buying age and a measure to establish a commercial adult use market. While no early sales provisions are included, Montana companies would be the only businesses able to start sales for the first year after legalization.

New Jersey voters may make history, legalizing the adult use of cannabis and triggering a race among Mid-Atlantic states to implement sales first. While all of New Jersey’s neighbors have existing medical cannabis programs, none have taken steps to expand further. In recent years, numerous regional state legislatures have attempted to legalize, and Public Question 1 may tip the scales for an entire region with over 50 million residents.

The text of the amendment is brief, but it establishes a definition for ‘cannabis’ while permitting possession, use, and industry operations for adults ages 21 and up. The existing Cannabis Regulatory Commission would be tasked with regulating the industry, but the state legislature must first come to an agreement and pass enabling legislation.

Currently, New Jersey’s medical market includes roughly fifteen licenses, including cultivation and manufacturing, as well as a limited number of dispensaries. The next phase for cannabis in NJ is uncharted territory for now: it is unclear if existing licenses will be given the first opportunity to serve the general public.

Given licensing delays and a slow rollout in Illinois, lawsuits and delays could be in New Jersey’s future — with some analysts suggesting a four-year timeline from amendment passage to full implementation. This may be good news for MSOs, including Columbia Care, Verano, and Acreage Holdings, among others.

South Dakota has long been unfriendly to cannabis in all forms and has some of the nation’s strictest marijuana possession penalties. While other non-medical states have at least given a nod to low-THC medical hemp programs, the Mount Rushmore state hadn’t established any kind of hemp or cannabis program at all until the legislature passed industrial hemp legalization this past spring.

Medical use is enshrined in both proposals, while the constitutional amendment would prevent the legislature from any type of statutory tampering to limit a retail market. The constitutional amendment would establish a commercial market for both adult use and medical purposes. Medical use would include home cultivation. As there is no cannabis market in the state at this time, no businesses would be able to take advantage of “early sales” provisions, as seen in other states. 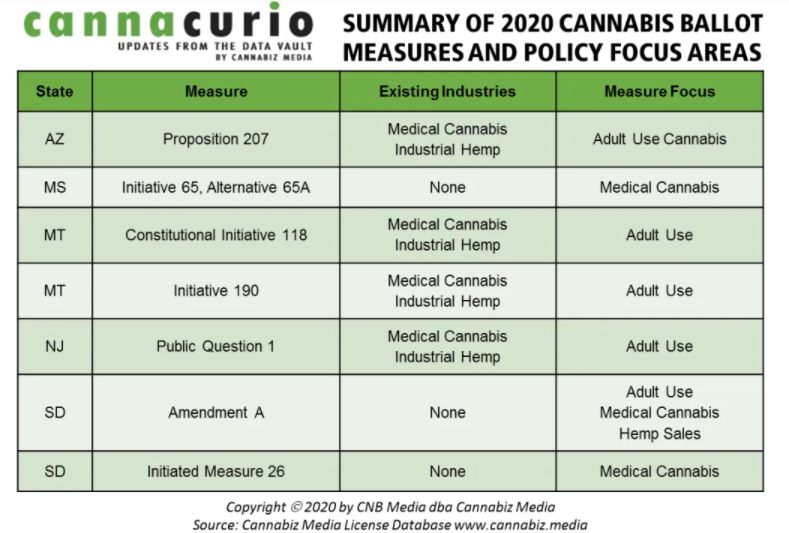 Previously, medical cannabis programs and commercial licensing schemes predated adult use legalization, and the majority of these proposals came into existence by way of the ballot. In most of the earliest states to fully legalize, this was the case: Colorado, Washington, Alaska, Oregon, California, Massachusetts, and Nevada all had some form of voter-approved medical cannabis legislation first.

Some legalization measures have allowed for existing medical dispensaries to launch sales to adults during a period of late-stage rulemaking. These businesses have operated under modified compliance rules, with track-and-trace requirements and varying tax rates until legalization rules are completed.

After Oregon voters approved legalization in 2014, the state’s medical market rapidly expanded with early sales on the horizon. At one point, there were more medical dispensaries in the state than Starbucks or McDonald’s locations. That number later dropped as businesses converted their licenses over.

For some of the states with legalization on the ballot this year, the transition out of medical will pose challenges: product shortages, long customer lines, new tax rates, uncertainty over product offerings, and testing requirements on top of an already difficult pandemic business environment.

Overall, legalization measures promise to bring a significant impact to consumers and patients in Arizona, Mississippi, Montana, New Jersey, and South Dakota. It’s hard to quantify the short-term improvements to consumers and industry operators, as passage of these initiatives will set off a flurry of legislative and regulatory discussion over the holidays and into the spring. Existing licensees and hopeful applicants should keep an eye for new opportunities: public comment periods, application deadlines, and new sales opportunities on the horizon. 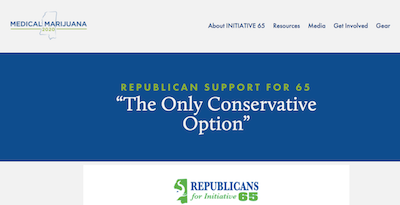