Vaping and the Pros and Cons of using Ice Bongs

If you are a fan of the herb, you will already know there’s a vast difference between smoking a joint and taking a hit from a bong. Whilst, bongs are not to everyone’s taste, for those who enjoy them, a good bong is guaranteed to deliver the perfect smoke time after time.

When it comes to deciding which type of bong to purchase, Ice Bongs are best at doing what bongs do, which is lowering the temperature of tough smoke so it goes easy on the lungs. However, using an ice bong or ice catcher does come with a few other notable advantages.

The greatest is its ability to filter. The ice not only cools but it is also great at filtering the smoke to remove the impurities. This leaves you with a softer smoke and a renewed hit every time. If you are one of those smokers with a thing for bigger hits then you need to know that the better you get the filtration, the better your chances of inhaling a smooth pure smoke to reach your desired level of rips.

Exploring the world of ice bongs is good for satisfying anyone’s scientific curiosity and perfect for users into inventing a weed novelty. They also look cool and are bang up-to-date along with giving you that satisfying smoke kick that lets you unwind. Even so, a word of caution. Never be tempted to try drinking bong water just for the sake of it. Not even to score points or win some bet. The results are unpleasant and it takes an age to get rid of the disgusting aftertaste.

Just like any really good thing, ice bongs do have their fair share of drawbacks. With a full range of exotic shapes and sizes, a good Ice Bong can be pricey going as high as $60 for a decent show stopper. Of course, the quality and the experience make the expenditure worthy even if you are on a budget and still really want it.

As the ice cubes begin melting they tend to stick to each other, making their removal difficult. The Ice Bong needs to be handled carefully. Even though bongs are tough and formulated to withstand temperature fluctuations, some of the more tender designs are still prone to breaking if you try to force the ice out.

Buzzes about the possible health hazards of Ice Bongs keep springing up every now and then resting on the fact that inhaling air at such a low temperature is unhealthy and can lead to bronchitis. Since there is still no firm concrete evidence to back this idea, we have to leave it at that and let people focus on cannabis instead.

As with most things, the more you play, the better the product you get but if you are a serious taker, it is worth splashing out on an Ice Bong every time. After all, it is ‘the’ thing when it comes to an easy way to get the smoke hits and who’s going to stop you having a little fun with it! 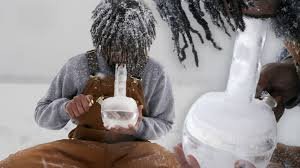