Vermont: Former Waterbury CBD business owner reaches plea deal on charges accusing him of not paying people from whom he bought hemp.

Aformer Waterbury CBD business owner has reached a plea deal on charges accusing him of ripping off people from whom he bought hemp.

The plea agreement allows Douglas Bell to avoid prison time, but he must pay nearly $40,000 in restitution to those he was charged with scamming.

Bell, a former Middlesex resident who owned a CBD shop on Route 100 in Waterbury, was initially arrested and charged in 2019 related to his dealings with five different farmers and vendors.

A handful of other parties later came forward, with Bell at one point facing more than a dozen charges, including theft of service, writing bad checks and false pretense.

Under the plea agreement, Bell was sentenced Friday to a total of two to four years in prison, all suspended except 10 days he has already served. Bell, who will be on probation for five years, has agreed to pay roughly $40,000 in restitution.

He also pleaded guilty earlier in the hearing in Washington County Superior criminal court in Barre to several misdemeanor charges — three counts of false pretenses, two counts of passing bad checks and a single count of driving under the influence. Several other charges were dismissed.

The case was heavily litigated over the years, focusing on questions of intent and whether the prosecution could show Bell “knowingly” agreed to contracts with farmers that he couldn’t fulfill.

Douglas Bell, owner of CBD-Vermont, stands with his public defender in Barre Criminal Court in 2019, accused of not paying Vermont farmers for their hemp products. File photo by Grace Elletson/VTDigger 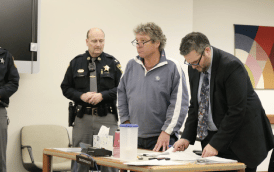