Smith’s oncologist at Cedars-Sinai, Dr. Steven Miles, approved of his medical marijuana use as a means to deal with the effects of chemotherapy and pain from an unrelated back surgery.

In September 2010, Smith became eligible for a liver transplant, but after testing positive for marijuana in February he was removed from the transplant list. Smith’s cancer was in remission until just recently, but now he is scheduled to undergo radiation treatments in the next few days.

“Cedars-Sinai would not be breaking any laws, federal or otherwise, by granting Norman Smith a liver transplant, and it’s certainly the ethical thing to do.” Smith is not the only medical marijuana patient in the U.S. being denied a transplant. At least one other Cedars-Sinai patient reported to ASA in 2008 that they had been kicked off the transplant list because of their legal medical marijuana use. Over the past four years, ASA has received numerous reports of patients being purged from transplant lists across California, as well as in other medical marijuana states like Hawaii, Oregon, and Washington.

In 2008, Seattle resident and medical marijuana patient Timothy Garon died after being denied a liver transplant by the University of Washington Medical Center. A year later, in 2009, Big Island resident and medical marijuana patient Kimberly Reyes died at Hilo Hospital after being denied a liver transplant. Cedars-Sinai is demanding that Smith not only abstain from marijuana use for at least six months, forcing him to undergo random toxicology tests, but he is also required to participate in weekly substance abuse counseling over the same period. Although Smith was within two months of receiving a transplant before he was de-listed, he will be put at the bottom of the list even after satisfying the policy requirements. “ASA seeks to change this harmful and uncompassionate policy not only for Smith’s benefit, but also for the benefit of numerous other medical marijuana patients who are being made to suffer unnecessarily as a result of political ideology,” said Elford.

Between January 2010 and October 2011, Smith took part in a rare clinical trial to combat his liver cancer. The trial, which included only 60 people worldwide, involved weekly infusions and daily pills. Smith also smoked medical marijuana during this time, but stopped in August 2011 to try to adhere to the transplant eligibility requirements.

Smith was the only patient in the entire 93-week trial who had a successful remission, earning him the moniker of “Miracle Man.” Because of the cancer’s return, Smith may not have six months to live.

However, instead of re-listing him for a transplant, Cedars-Sinai is scheduling him for radiation treatment. “Norman Smith’s life hangs in the balance between his desperate need for a liver and an anti-marijuana sentiment that informs a misguided and life-threatening transplant policy,” continued Elford. Smith not only has the support of his oncologist and other Cedars-Sinai staff, but also his psychologist, who wrote a strong letter of recommendation that Smith be approved for a liver transplant.

Nonetheless, Dr. Steven D. Colquhoun, the director of Cedars-Sinai’s Liver Transplant Program compared Smith’s legal medical marijuana use to “substance abuse.” In a letter sent to Smith in May, Dr. Colquhoun indicated that the liver transplant center “must consider issues of substance abuse seriously since it does often play a role in the evolution of diseases that may require transplantation, and may adversely impact a new organ after a transplant.” Despite Dr. Colquhoun’s assertions and Cedars-Sinai’s restrictive policy, an independent study has shown that marijuana use has no adverse impact on the survival rate of transplant recipients. 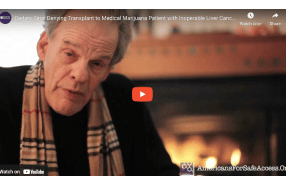