Wake Up California Cannabis Growers Its 2019  and the world you may have grown up and worked in since the late 1990’s was changed forever on January 1, 2018 due to the passage of SB 94 [Proposition 64].

The passage of SB 94 [Proposition 64[2]] represented a compromise…

The population of California received the ability to legally purchase cannabis for recreational or “adult-use” rather than be restricted to “medical use”.

The State of California seized an opportunity to generate substantial tax revenues through the creation of a Cannabis Cultivation and Excise Taxes [“CCT and CET”][3] in addition to expanding the existing sales tax to adult-use cannabis. The State of California also created three agencies to regulate the entire legal cannabis industry in California[4] retail dispensaries, distribution and testing labs, manufacturing and extraction, and cultivation[5]. As a consequence, the legal cannabis market went from being a “light touch” laissez faire medical cannabis market to a highly regulated commercial market.

We have written extensively about the missteps, mistakes and outright failures that the California regulatory and tax agencies have made over the past eighteen months in their attempts to create licensing processes, promulgate regulations, and oversee the transition to a regulated commercial market[6]. The black market continues to thrive, and may have even grown since MARCUSA became the law[7].

The MARCUSA legislation created what many call a system of “dual control” where cities, municipalities and counties throughout California were granted and maintain the first rights over cannabis activity through land use [“zoning”] and permitting which has created a patchwork throughout California. The cities, counties and municipalities maintained the right to tax cannabis activity within their jurisdictions.

The situation is further complicated by the existence of “delivery companies” that would appear to have the right to deliver cannabis product anywhere in California. Further, under Proposition 215 and People v. Kelly, may very well be a challenge brewing under the California Constitution over an individual’s right to receive medical cannabis anywhere in the State of California.

We believe that the description above provides a quite accurate and reasonably complete of the cannabis markets, regulatory and tax environment in California as of the date of this article. The environment is complex and changing rapidly in many dimensions.

Our view is that the State of California will not succeed in creating a viable legal commercial market unless it undertakes urgent steps to correct a number of problems of its own making that we have written about many times. There is another aspect that is equally as clear, and that is that there is absolutely no way that a Grower, Extractor, Distributor or Dispensary can reasonably expect to understand, interpret and comply with complexities of licensing and operation of a cannabis business in California without engaging attorneys, tax advisors, accountants, water quality consultants, etc. The changes in the rules make that both an unreasonable expectation and impossible.

As such when a grower both misunderstands the complexities of the commercial cannabis market as it presently exists in California, and then misconstrues the application of complex quotation such as President Theodore Roosevelt from a century ago when he stated:

“It is not the critic who counts; not the man who points out how the strong man stumbles, or where the doer of deeds could have done them better. The credit belongs to the man who is actually in the arena, whose face is marred by dust and sweat and blood; who strives valiantly; who errs, who comes short again and again, because there is no effort without error and shortcoming; but who does actually strive to do the deeds; who knows great enthusiasms, the great devotions; who spends himself in a worthy cause; who at the best knows in the end the triumph of high achievement, and who at the worst, if he fails, at least fails while daring greatly, so that his place shall never be with those cold and timid souls who neither know victory nor defeat.”

Our view that the use of that quote in this context is a small-minded and short sighted view. The current reality is that there would be no legal commercial cannabis industry if plant touching business owner were not growing, processing and selling cannabis flower and other products. However, the likelihood that those businesses would survive, let alone prosper without the existance of all of the ancillary non-plant touching business today is a BIG FAT ZERO. As such, every busiess in the ecosystem plant touching or not need to understand the purpose of, and appreciate every other business in the legal cannabis ecosystem in California.

[3] The taxes are administered by the California Dept. of Tax and Fee Administration [“CDTFA”]

[4] The legal cannabis industry in California is regulated by the Bureau of Cannabis Control [“BCC”], the parent agency of which is the California Dept. of Consumer Affairs [“DCA”]. BCC was given the “power, duty, purpose, responsibility, and jurisdiction to regulate commercial cannabis activity” in MAUCRSA. BCC has direct oversight responsibility for retail and transportation only dispensaries, distributors, and cannabis event organizers.

Cannabis manufacturing and extraction and testing laboratories fall under the jurisdiction of the Manufactured Cannabis Safety Branch [“MCSB”], the parent agency of which is the California Dept. of Public Health [“CDPH”]

Cannabis Cultivation is the responsibility of CalCannabis, the parent agency of which is the California Dept. of Food and Agriculture [“CDFA”]

[5] Indoor and outdoor cannabis cultivation by persons and entities licensed under this division shall be conducted in accordance with state and local laws related to land conversion, current building and fire standards, grading, electricity usage, water usage, water quality, woodland and riparian habitat protection, agricultural discharges, and similar matters. State agencies, including, but not limited to, the State Board of Forestry and Fire Protection, the Department of Fish and Wildlife, the State Water Resources Control Board, the California regional water quality control boards, and traditional state law enforcement agencies, shall address environmental impacts of cannabis cultivation and shall coordinate when appropriate with cities and counties and their law enforcement agencies in enforcement efforts.

[7] See Critical Changes, specifically for our comments on raid activity by various California agencies, including the California National Guard. 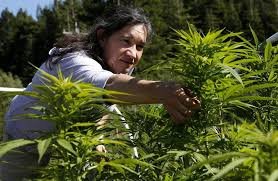