Here’s teh introduction to the piece that indicated by its headline that Mexico will be a bigger regulated cannabis market than the USA..

MEXICO CITY—Mexico is home to the world’s most powerful drug cartels, who have terrorized the country for years. But the country is poised to try something different in tackling the gangs by legalizing at least one of their products: marijuana.

Mexico is set to become the world’s largest legal cannabis market as its Congress wraps up legislation in the coming weeks to legalize pot throughout the supply chain, from farming to distribution and consumption.

Mexico’s Senate passed a bill in late November legalizing recreational marijuana. Lawmakers in the lower house say they will approve a bill by February, though they want to raise the amount of pot consumers may possess in public beyond the Senate bill’s limit of 28 grams, or about an ounce.

Currently in Mexico, one can possess up to five grams of marijuana without being arrested. The use of marijuana for medicinal purposes has been legal since 2017.

“We are committed to regulating cannabis. It’s a right of Mexicans,” said Ignacio Mier, the majority leader in Mexico’s lower house and a member of President Andrés Manuel López Obrador’s Morena party, in an interview. 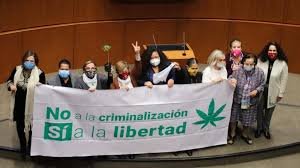