Warnings About “phytol” in report published by “Inhalation Toxicology”, the journal of the International Forum for Respiratory Research

MJ Biz reports……As cannabis vaping pens grew in popularity in late 2019, concerns grew about the safety of the products, spurred by reports of illness, and even deaths, of tobacco vape users.

Vape manufacturers rushed to assure regulators and consumers their products were safe, despite having no clear understanding of what ingredients might actually be dangerous.

Two of the suspected ingredients were phytol and propylene glycol, both of which can be used as thinning agents for cannabis extracts.

Now, a new study published in Inhalation Toxicology, the journal of the International Forum for Respiratory Research, has shown that phytol might be significantly more toxic than propylene glycol.

Phytol, a terpene best known for its presence in green tea and a promising antioxidant, is found in high amounts in some marijuana varieties, most notably Cheese and Sour Diesel.

Propylene glycol is a diol compound that is often used as a carrier in vapes because of its ability to produce smokelike vapor when aerosolized. 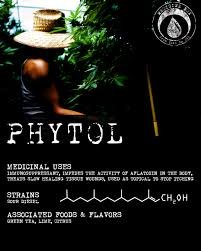