Washington D.C. to Vote on Initiative 81

In addition to the races for the D.C. Council, D.C. State Board of Education and advisory neighborhood commissioner, District voters will be asked to approve Initiative 81 on Nov. 3 which would decriminalize the possession and distribution of entheogenic plants and fungus — some known as “magic mushrooms” — in the city and alter the penalties.

On Aug. 5, the D.C. Board of Election approved Initiative 81 for the November general election ballot. The initiative, if the voters approve, would advance The Entheogenic Plant and Fungus Policy Act of 2020, a measure to decriminalize the use of entheogens, such as psilocybin and ayahuasca. If enacted, under the law the District’s Metropolitan Police Department will make investigation and arrest of non-commercial planting, cultivating, purchasing, transporting, distributing and possessing the lowest enforcement priority and issues a non-binding call for the D.C. attorney general and the U.S. Attorney for the District of Columbia to cease prosecution of city residents for these activities.

District resident Melissa Lavasani, who serves as the chairwoman of Decriminalize Nature DC, the organization that led the Initiative 81 effort, said her personal experience with psychological problems led her to use small doses of psychedelic plants.

“After the birth of my second child, I had a battle with depression and suicidal thoughts,” Lavasani told the Informer. “I tried to heal with therapy and prescription drugs but that didn’t work for me. Fortunately, I am in a place of privilege and had plenty of sick leave and an understanding supervisor at my job with the D.C. Department of Energy and the Environment and a supportive husband. A friend recommended I try psilocybin and I did. I began to feel much better.”

Lavasani said if natural plant-based medicine worked for her, it should be an option for all District residents.

“D.C. residents from all parts of the city should have access to entheogens,” she said. “This city is in a mental health crisis and that was the case even before the coronavirus pandemic came here.”

Lavasani stressed Initiative 81 won’t legalize psychedelic plants for medicinal purposes, saying they are still listed by federal law as Schedule I drugs that are illegal. Nevertheless, she said, a growing body of evidence suggests psychedelic plants are a remedy for mental health problems and “it would be silly for D.C. not to have this.” She points out Johns Hopkins University has a center studying natural plant-based drugs to treat some mental illnesses.

“I would encourage people to read the science,” Lavasani said.

However, Dr. LaQuandra Nesbitt, director of the D.C. Department of Health, views psychedelic plants to treat mental illnesses with skepticism.

“I haven’t given that much thought,” Bowser said. “This is not a burning issue for D.C. residents.”

“We are all experiencing trauma in the community,” she said. “That is why you have Black Lives Matter which is not only a political movement but a movement for humanity and it is based on trauma. Issues such as affordable housing and education have their basis in trauma at some level and it needs to be addressed. Entheogens may be one way to do that because if trauma isn’t addressed, nothing will change.”

“What are the moms at school going to say about this?” Melissa Lavasani remembers thinking.

Melissa Lavasani hesitated last December as she prepared to submit the paperwork for a ballot initiative that would decriminalize natural psychedelics like magic mushrooms, mescaline, and ayahuasca. “What are the moms at school going to say about this?” she remembers thinking.

Lavasani’s neighbors in the H Street, Northeast, neighborhood were likely to know her as the budget officer for the DC Department of Energy & Environment, or perhaps as the mother of two young neighborhood kids. What few knew at the time, though, is that Lavasani felt that substances many people think of as recreational drugs might have saved her life. 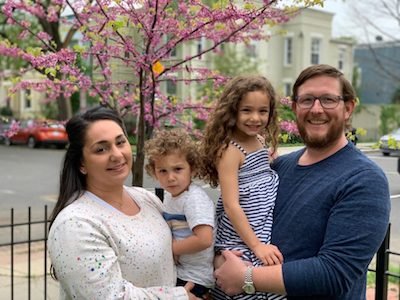