We request that the U.S. Botanic Garden display male and female hemp plants.

Hemp was fully legalized for commercial production in the 2018 Farm Bill after four successful years of research under pilot programs authorized in the 2014 Farm Bill.  The U.S. Department of Agriculture published final rules for Establishment of a Domestic Hemp Production Program on January 19, 2021, fully implementing the 2018 Farm Bill.

Since 2014, hemp has become a respected agricultural commodity in the U.S.  More than 45 states and 40 tribes currently engage in production of agricultural hemp.  Hemp is a rapidly growing commodity, has numerous value chains and is used in the food, health and wellness, cosmetic, construction, automotive and traditional industrial sectors, to name a few.  Hemp-derived products are found in the general retail marketplace both domestically and internationally.  The market has grown exponentially since the implementation of the pilot programs and some expect the market to reach $26.6 billion by 2025.  More than half a million acres of carbon-sequestering hemp are expected to be planted in the U.S. in 2021, according to Vote Hemp.  Some domestically grown hemp is also used for the production of the non-psychoactive chemical cannabidiol, or CBD.  Therefore, the plants might be ideally located in the “medicinal plants” section of the Botanic Garden.

We understand that the display of the hemp plants would be the first time the Botanic Garden would display cannabis in its collection.  As such, we want to note the legal and scientific distinction between cannabis classified as hemp and cannabis classified as marijuana.  Hemp contains extraordinarily little tetrahydrocannabinol, or THC, which is the intoxicating compound in marijuana.  Hemp is legally required to contain no more than 0.3% THC and is therefore not intoxicating.  As noted above, hemp (cannabis with no more than 0.3% THC) is fully legal and was removed from the Controlled Substances Act (CSA) in the 2018 Farm Bill.

While this request is specific to displaying hemp plants, we note that more states and the federal government are beginning to legalize various forms of cannabis classified as marijuana.  Last Congress, the House of Representatives passed the Marijuana Opportunity Reinvestment and Expungement Act of 2018, which would have descheduled all cannabis from the CSA.  We expect similar legislation will be introduced in both the House and Senate in the 117th Congress.

Hemp has a long history of cultivation in the U.S.  Hemp was grown by most of the Founders, and in 2018, George Washington’s Mount Vernon Estate harvested its first hemp crop since 1799.  All ships in every war prior to World War II had ropes and sails made from hemp grown in the U.S.  Until the Marijuana Tax Act of 1937, which was found to be unconstitutional in 1969, hemp was a major agricultural commodity in the U.S.

Given that hemp is legal and enjoys national, bipartisan support, now is an appropriate time for the Botanic Garden to display hemp plants.

We appreciate your consideration of this request.  We request a response in writing by May 4, 2021. 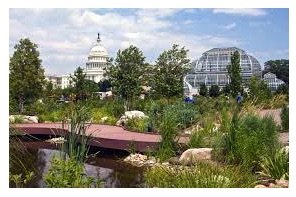