From Wikipedia,
Rubin is generally described as a conservative or a libertarian. Rubin has described himself as a classical liberal.This article is about the show host and comedian. For the author, see David Rubin (author). For other uses, see David Rubin.

David Joshua Rubin (born June 26, 1976) is an American political commentator, YouTube personality, and talk show host. He is the creator and host of The Rubin Report, a political talk show on YouTube and the network BlazeTV. Launched in 2013, his show was originally part of TYT Network, until he left in 2015, in part due to widening ideological differences. Previously, Rubin hosted LGBT-themed talk shows, including The Ben and Dave Show from 2007 to 2008 and The Six Pack from 2009 to 2012, both of which he co-hosted with Ben Harvey. 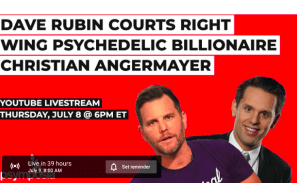