Webinar: The Future of Legal Psilocybin Therapy in Oregon & Beyond, with guest Sam Chapman

In 2020, Oregon became the first state in the nation to pass a ballot measure creating the framework for a Psilocybin therapy program. However, the passage of Measure 109 was only the first step. Sam Chapman, the Campaign Manager for Measure 109, is now guiding the development of rules and regulations over the next two years to create the most affordable, accessible, equitable program possible. Join us for a conversation with Sam and Green Light Law Group shareholder Andrew DeWeese, to get an insider’s view on the rulemaking process and what is coming up next for Measure 109 implementation.

This webinar will provide:

Sam (he/him) is the Executive Director for the Healing Advocacy Fund, a nonprofit organization supporting the implementation of Measure 109 in Oregon with education and advocacy.

Sam has over a decade of experience in advocating for progressive drug policy reforms at the local, state, and national level. In 2013 Sam co-authored House Bill 3460, the Oregon law that legalized medical marijuana dispensaries. His previous experience includes consulting for statewide political campaigns, assisting local governments in writing rules and regulations, crafting and advocating for equitable access to emerging healthcare treatment options, and identifying new opportunities within emerging industries.

Sam has been a resident of Oregon for 25 years. He holds a bachelor’s degree from the University of Oregon in Philosophy and Political Science.

Andrew (he/him) founded the Oregon Cannabis Law Group in 2014 and merged with Green Light Law Group in 2019. He has long been on the forefront of the novel legal issues concerning the emerging cannabis industry. Andrew represents and advises cannabis business clients on state law compliance and licensing issues, as well as in civil litigation and private arbitration. In 2019, Andrew led the Green Light Law Group legal team that prevailed against the Oregon Liquor Control Commission in the Oregon Court of Appeals, striking down Oregon’s short-lived ban on flavored cannabis vape products. 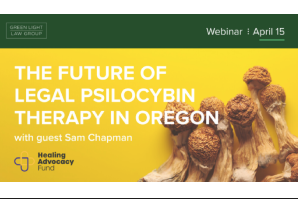