We have no issue with soldiers taking LSD we’re just interested in the psychology behind it. We’ve reported in the past from the UK & The USA and now a NZ  serving soldier has, unfortunately, been sentenced to two years in Military prison for supplying and consuming LSD

A soldier who shared a photo of himself taking acid will go to military prison for two years and has been dismissed from service.

At a court martial in Linton on Monday, Signaller Braedan Francis Onehi​, 23, faced multiple charges of supplying, offering to supply and consuming LSD in Linton Military Camp in 2019 between May and August.

Onehi’s defence lawyer, Steve Winter, pleaded guilty on his behalf to three representative charges of consuming, supplying and offering to supply a fellow soldier the class A controlled drug.

Onehi sparked an investigation into his drug use after sending a fellow soldier a picture of himself with three tabs of acid on his tongue.

As military police analysed his phone, it revealed a series of transactions and messages between himself and another soldier, Private Vincent Van Gent. 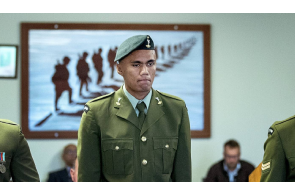