The rationale for doing so centered not on an antitrust analysis, but because he did not like the nature of their underlying business.

Attorney General William Barr’s personal opposition to marijuana led him to direct improper antitrust investigations into multiple cannabis company mergers—accounting for nearly one-third of the division’s cases in 2019—according to written testimony from a current Justice Department official who is slated before the House Judiciary Committee on Wednesday.

Here’s the testimony in full

Here are some of the highlights of the testimony

Today, I will describe two forms of investigations undertaken over the objections of the career staff. First, at the direction of Attorney General Barr, the Antitrust Division launched ten full-scale reviews of merger activity taking place in the marijuana, or cannabis, industry. These mergers involve companies with low market shares in a fragmented industry; they do not meet established criteria for antitrust investigations

This part of the testimony is particularly damming
Last year, the Antitrust Division reviewed the proposed combination of MedMen and PharmaCann, two companies that supply cannabis. When career staff examined the transaction, they determined that the cannabis industry appeared to be fragmented with many market participants in the states that had legalized the product. As a result, they viewed the transaction as unlikely to raise any significant competitive concerns.

However, on March 5, 2019, Attorney General Barr called the Antitrust Division leadership to his office for a meeting entitled “Marijuana Industry Merger Review.” As a Microsoft Outlook delegate of one of the attendees, I was copied on the calendar appointment but did not attend the meeting. The Antitrust Division political leadership asked staff to prepare a short briefing memo for Attorney General Barr before the meeting. In that memo, staff emphasized in underlined text that in its preliminary view, the transaction was unlikely to raise any significant competitive concerns that would justify issuance of Second Requests.

The rationale for doing so centered not on an antitrust analysis, but because he did not like the nature of their underlying business.

The Marijuana Moment report goes on to say…

Those investigations, which appear to have influenced the end of at least one major merger between MedMen and PharmaCann, were protested by career DOJ staff who objected to the rationale for such inquiries. The Justice Department’s Antitrust Division typically must demonstrate that there’s substantial risk of anticompetitive harm for mergers it investigates, including the potential for monopolization.

The official stressed that the directive from Barr resulted in the waste of departmental resources, with cannabis transactions at one point representing “five of the eight active merger investigations in the office that is responsible for the transportation, energy, and agriculture sectors of the American economy.”

Read the full MM article at 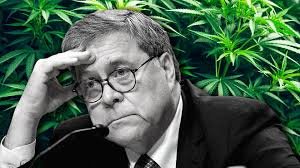