Wired Article: Using An App To Guide Your Trip

Field Trip offers supervised, in-clinic drug experiences to treat some mental illnesses. But if you want to keep your social distance, an app to stand watch could be the next-best thing.They write

Here’s the introduction to their piece. Reading the article it seems like the early days of apps where the idea is there but the thinking hasn’t really advanced to something that would make an app really useful to a trip especially with a plant based psychedelic where nature is going to supplant technology.

The thought of uber-acid is somewhat jarring to this correspndent.

In the end the tech here is just a sales tool and won’t be replacing doing psychedelics with a close friend or guide.

“WHAT TYPE OF Trip are you taking?”

The question appears on a phone screen, atop a soft-focus illustration of a dusky, Polynesian-seeming landscape. You could type in meditation or breathwork, or label it with a shorthand wink, like a mushroom emoji. The next question asks, “How far are you looking to go?” You choose “moderate”—you’re planning to ingest, say, 1.5 grams of magic mushrooms, which is still enough to make the bathroom floor tiles swirl like marbled paper. Select one of five prerecorded ambient soundtracks, and answer a few gentle questions about your state of mind. Soon you’ll be plumbing the depths of your consciousness, with an app as your guide.

It’s a capital-T Trip because the app belongs to Field Trip Health, a Toronto-based venture focusing on psychedelic-assisted psychotherapy. The Trip app, which begins a soft launch this week, is a digital companion to Field Trip’s clinics in New York, Los Angeles, and Toronto, where patients settle into rooms filled with Svago zero-gravity leather recliners and weighted blankets and take an ego-quieting psychedelic substance under the supervision of a Field Trip-trained therapist.

Field Trip belongs to a new and growing class of for-profit companies using psychedelic drugs (namely MDMA, ketamine, and psilocybin, the alkaloid that makes magic mushrooms magical) to treat depression, anxiety, and other obstinate mental illnesses. Unlike most players in that for-profit cohort, Field Trip is open for business. Field Trip isn’t dosing patients with MDMA or psilocybin; both are still listed by the government as Schedule 1 substances. But it’s also not waiting for legalization to find its customers. Instead, in New York and Toronto, Field Trip is treating select patients with ketamine, a dissociative drug that has FDA approval for off-label use right now. (The Los Angeles clinic opens later this month.)

And for those sheltering in place in the safety of the home, Field Trip’s new app handily distills its consciousness-expanding protocols, making a guide—or at least a facsimile of one—accessible whether you can visit a clinic or not.

Psilocybin legalization is likely years away, but Field Trip cofounder Ronan Levy, a former executive at two Canadian cannabis companies, says the company plans to open 75 clinics in North America by 2024, if not sooner. “We’re building the infrastructure to support the coming wave, when psilocybin legalization efforts get across the line,” he says. “These experiences can be four, six, eight hours, and most doctor’s offices aren’t designed for that. You need a very different experience.” 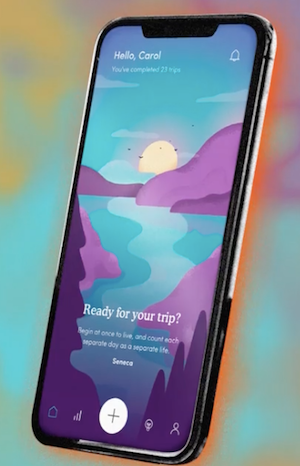