This article published on the Modern Ghana website gives a reality check to all the excitement about the legalization of cannabis in Rwanda that all the business cannabis news outlets were carrying last week.

I now understand it why people say Paul Kagami is a dictator. He is now running his country as doing some group of Sakawa boys in Ghana who at the helm want to carry our mineral resources into offshore accounts that only benefits them and their cronies.

Many a youth in Rwanda this week will definitely have mixed feelings and curse their stars upon hearing the announcement that cannabis is legalised in their country.

Like, the unsuspecting youth of Ghana who were deceived by proponents of a certain Agyapa Royalties deal will secure them a better future, they’d imagined legalisation of cannabis means the freedom to puff the herb across the street, throwing the fine smoke into the eyes of the law enforcers who not long ago chased them when they smoked the natural herb.

News this week has it that the Rwandan president, Paul Kagami has added his country to the $345 billion global cannabis market, but the herb is only meant for export, into the foreign market, but not for local consumption.

After chairing a cabinet meeting last Monday, 12th October, 2020, Mr. Paul Kagami agreed to a statement issued the following day by the Rwandan Development Board (RDB) that: “laws on the highly therapeutic herb still remains, and there is a ban on its smoking, and not to be issued by a medical doctor too, or else, you’ll land in prison”.

Ei, this man is now running his government as Ghana’s New Patriotic Party (NPP) Sakawa Boys who were bent on sharing our gold royalties amongst themselves if the opposition National Democratic Congress (NDC) has not stripped them naked.

The lanky teetotaller Tutsi Mr. Paul Kagami who is praised largely in Africa for bringing development to a wartorn country that saw Hutus killing Tutsis in the 1994 Genocide that claimed over 800,000 lives in hundred days, believes in the medicinal value of the herb. He alone knows how therapeutic it is. How useful it’s, and even to the foreign market. He never mentioned to us by what means he learnt the herb is therapeutic since the country’s doctors are not to sanction its usage for recreational purposes to any Rwandan.

No one knows how to eat meat than the cat, Mr. President. Here in Ghana, the people have risen up to claim back our precious gold upon realising the festering fraudulent deals in there.

By this, president Paul Kagami is failing to end the dictatorship accolade given him by opponents owing to his peremptory regulations that impose his will against that of the larger populace.

First it was the opposition parties’ activists that accused him of stifling dissent, today it’s the country’s youths who are whimpering because he’s only coming out to tell them the enjoyment and the experience in the ancient herb known by various names as: marijuana, bobo, cannabis, and Wee, by Ghanaians.

He’s only giving licences to investors in the cannabis cultivation, which is only to be exported to those who need it abroad, not to end his dictatorship to open the gates for the local demand by the youths who want to go hey and gay and have a good laughter after reading satires as this.

Unlike the Rwandans who are gagged for speaking out against manipulation, Ghanaians with one voice have spoken to bring back president John Dramani Mahama to rescue Ghana from the hands of Sakawa Boys (fraudsters) in this year’s December 7 polls to safeguard our bequeathed resources. 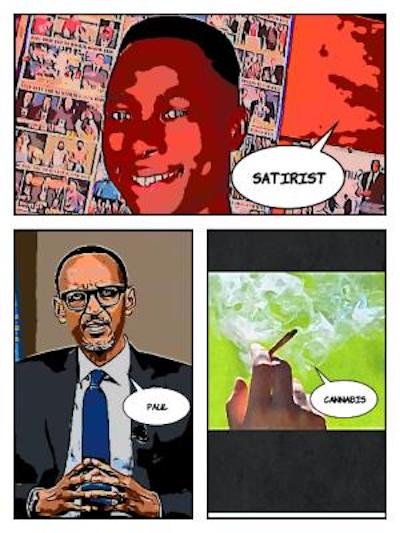