In her story Teri highlights ……………. Defrancesco was caught up in controversy this winter when a short seller report detailed how he made undisclosed millions off leading the sale of LatAM cannabis licenses to Aphria ($APHA) for inflated values. He is being personally sued for securities fraud in the Southern District of New York in a class action lawsuit filed by main street shareholders of Aphria. Court filings show Andy has been avoiding service of the Aphria lawsuit at his Miami home and Florida office.

“Defrancesco also has this guy at Grizzle do coverage his way.” Lambo’s statement about Grizzle was made in justification of why he’s backing Defrancesco. His twitter handle is @lambojohnny and his real name is John Mastromattei. Lambo also told the Bay street market player he was given direction to tweet disparaging or fake news about this reporter.

Grizzle is a Canada based research firm that publishes reports on Tech and Cannabis with the mantra of “The language of new money”. The head of research is a man named Scott Willis who claims he is a certified financial analyst. Willis ran reports naming Aphria’s Vic Neufeld as the most trusted CEO.  ………..

Read the full story at  http://www.teribuhl.com/2019/08/07/andy-defrancesco-secret-deals-promoter-payoffs-verano-shares-pledged-apha-solcf/

Read our original pieces on  Defrancesco  penned by Buhl for CLR 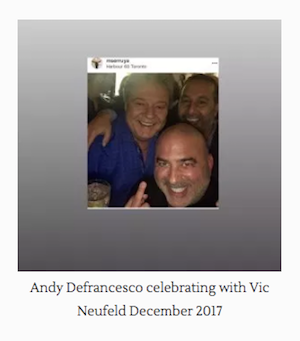