Must read report from High Country News about “grower”Dineh Benally.

If the name rings a bell… it should

Last year, Dineh Benally, the former president of San Juan River Farm Board in the Navajo Nation, oversaw the transformation of 400 acres of cropland into illegal marijuana farms across the Shiprock chapter in the northeast corner of the reservation.

Despite a state, federal and tribal crackdown on the operation, multiple sources told Searchlight New Mexico and High Country News that he is attempting to establish new cannabis ventures in other Native communities. A source confirmed the same to Navajo Times.

Since the November raids, Navajo Nation Police Chief Philip Francisco told Searchlight New Mexico and High Country News that law enforcement did not know Benally’s whereabouts and presumed he was in hiding. Benally has several pending cases in tribal courts, and at least one federal investigation remains underway.

Through his business partners in Los Angeles at the time, Benally, who dubbed himself the “father of Native American hemp,” portrayed the farms as legal operations to investors and workers of Chinese descent. In Navajo Nation, he advertised his black-market project as a legal hemp operation meant for economic development.

For months, Benally has traveled to South Dakota, according to three investors and workers who were involved in his Shiprock operation. In late January, the Oglala Sioux Tribal Council voted to bar Benally from conducting any business within the reservation, citing concerns over the marijuana bust in Shiprock. 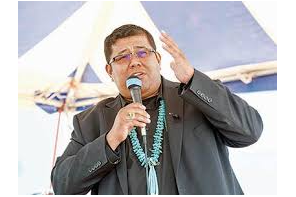