Great report from OPB that highlights what most industry insiders already know.

Oregon my not be the largest market in the US but it’s sophisticated and is mapping an outline for the future of what The US market could look like; both good and bad.

A subject we covered a number of times in 2020.

Larger businesses are buying up smaller Oregon cannabis operations. One company was even considering a cannabis monopoly in Africa.

As Oregon’s cannabis market matures, and a push to federally legalize the product gains momentum, an industry that got its start in basements, backyards and forests is taking its ambitions global, at the same time as local consumption drives breakneck growth.

Small shops are consolidating into chains. Brands are growing in clout. Small-scale consumers are getting more comfortable with the idea of stopping by the dispensary for a joint or edible, driving sales up 40% last year to over $1 billion.

Global ambitions span from Oregon to Florida — and on to Africa

Stem Holdings is based in Florida, but it has a significant footprint in the Pacific Northwest. And it briefly floated a plan to create a cannabis monopoly with the monarchy of Eswatini, a small country in southern Africa that’s often referred to as Swaziland.

Former Yerba Buena employee Sary Leu said the purchase was a surprise. But it was nothing compared to the shock staff received when they looked into Stem’s filings with the federal Securities and Exchange Commission and found plans for a cannabis monopoly in Eswatini.

“This monopoly deal would basically make it so the only people who’re making money from this is Stem Holdings and the king, or like the monarchy,” Leu said.

Farming is a significant industry among the one million people who live in Eswatini. And while cannabis is not legal, authorities have treated it as such a low priority that there’s a sizeable export trade with South Africa.

Despite those exports, in a press release last year Stem Holdings announced it had preliminary approval to be the only licensed cannabis producer in Eswatini, for a period of at least 10 years.

Leu said she believes that would deprive small farmers of their livelihoods. She accused Stem of human rights violations in big letters on the company whiteboard.

Not long after, Leu was fired. She has filed a complaint with the National Labor Relations Board. In a statement to OPB, Stem said it doesn’t discuss pending matters regarding past employees.

But Leu’s opposition to the monopoly appears to have some merit. The U.S. State Department’s report on Eswatini finds the country has significant human rights problems including corruption, arbitrary killings and restrictions on political participation.

“We think there’s real risk with adopting this as a model towards the legalization and regulation of cannabis,” said John Kagia, a cannabis market analyst with New Frontier Data. He said a monopoly could result in political unrest in the country.

“We’ve seen reports that there’s been more cannabis destroyed over the past few weeks in Eswatini that was being grown by small holder farmers, than there has been in the past years, if not decades combined,” said Kagia.

“That has the possibility of building resentment towards the authorities because this is people’s livelihoods.”

But those concerns look moot now. In a statement to OPB, Stem said its plans for Eswatini will not be completed and it now considers the matter closed.

Though the Eswatini deal may not be gaining traction, the U.S. cannabis sector has found other ways to tie Oregon to the wider world. Massachusetts-based Curaleaf, for example, finished its purchase of Cura Cannabis in Portland for $1 billion — with the backing of a Russian billionaire. That’s a sales price the equivalent of paying $100,000 every day for the next 25 years.

It’s one of many examples of consolidation as larger companies buy-up smaller ones, said Dinnin Huff, the marketing professor at Oregon State University.

Stem Holdings is a good example. Along with its purchase of Yerba Buena Farms, Stem has also bought cannabis companies in California, Nevada, Massachusetts, Maryland and Oklahoma. That gives it the size to serve a national customer base, if the federal government decriminalizes cannabis.

Stem’s purchases could well pay off. House Democrats recently pushed through passed a bill to decriminalize marijuana on the federal level — the first time either chamber of Congress has voted on the matter. Also, residents of South Dakota, New Jersey, Arizona, Mississippi and Montana all voted to legalize or decriminalize some form of cannabis this November.

“There really isn’t a playbook for what companies should be doing,” Dinnin Huff said. “But they’re trying to forecast and trying to situate themselves in the best place possible to hit the ground running and succeed if and when the market opens at the national level.”

Behind all of the cannabis business deals in Oregon is the fact that, after years of falling prices, the market has rebounded.

Dinnin Huff said there are several reasons for the increase., “Part of the reason we’ve seen prices increase is because of the wildfire as farms and testing facilities … are impacted or destroyed,” she said.

Another reason is the pandemic. Cannabis consumption is a popular form of recreation amid widespread COVID-19 restrictions. The Oregon Liquor Control Commission, which regulates the state’s recreational cannabis program, said sales are 30% higher than it forecast before the pandemic.

Also pushing prices higher: Some cannabis growers have left the recreational THC business, choosing to grow hemp or focus on sales of CBD, which are federally legal, instead. That reduces supply and increases prices.

And as chains grow, sellers may have more clout on the marketplace. Nectar, for example, has more than 20 stores in Oregon now and has added several more since the summer — all painted in its black and gold brand livery.

It’s yet another sign of a maturing market, Dinnin Huff said.

She predicts that consumers will see a handful of brands emerge as mainstream businesses. They’ll have the size to deliver large amounts of consistent quality cannabis, so consumers can expect the same experience every time.

The market is also likely to become more comfortable, not only for frequent consumers but also for people who’ve never used cannabis before. So the packaging will be more conventional, the qualities of each product will be clearer, and shopping will feel more like buying gourmet food or alcohol. Much like other consumer goods. 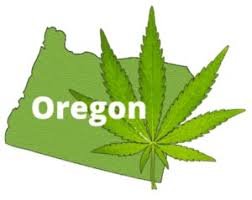